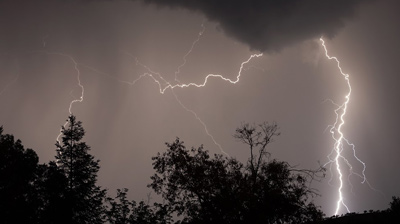 We rarely talk about the summer weather here in Paso Robles because there’s usually nothing to talk about.

After all, it's typically quite predictable--warm to hot days followed by reliable marine cooling in the evening. It's an ideal winegrowing climate that usually unfolds just like clockwork.

But on Sunday, the clockwork was thrown a curveball in the form of a sustained thunderstorm that dropped as much as 3.5 inches of rain in parts of the region, shattering previous rainfall records for the month of July. The lightning was abundant as well (local photo above by Jon Berezay).

So what did this weather disruption mean in the vineyard? Thankfully not a lot, beyond bringing some much-needed water to the land during this extended drought.

Now, there are plenty of times of the year when a sustained rainstorm such as this could cause serious viticultural trouble--such as the delicate flowering phase of the vines in the spring, or later in the harvest season, when wet conditions can create mold problems and logistical issues.

But right now, the grapes are as bulletproof as they’ll ever be. They have yet to undergo the process of “verasion,” whereby they begin to gain color and grow softer and become sweeter. Instead, at the moment, they are just firm green berries (see below). If you pop some in your mouth, you will find them crunchy and bracingly tart. So they’re pretty hardy at this stage in their development.

There was another upside to the summer rain, as co-owner and viticulturist Doug Filipponi noted, "This was a good test for everyone to find the weak spots in the vineyard roads and culverts. It was a  reminder of what we used to take for granted."

Of course, any time you get rain followed by humid conditions in the vineyard, you have to keep an eye out for mildew pressure. But all things considered, this was okay—if bizarre—timing for some much-needed rain here in the Central Coast wine country. 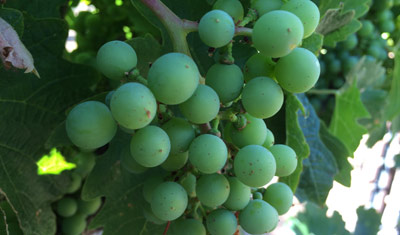