We like to say that soils are the ingredients behind our wines, as our estate Margarita Vineyard is home to a rare diversity of soil types that ebb, flow and intermingle from one block to the next. These soil types include shale, sedimentary, granitic, volcanic and ancient sea bed.

In some blocks, the base soil composition is obvious, such as at Oyster Ridge, where the ancient sea bed soil is literally percolating up to the surface in the form of ancient oyster fossils.

In other blocks, however, the nature of the soil isn’t plainly evident. Have a look at the exposed soil pit pictured above in one of our Zinfandel blocks. As you walk along the surface of this block, your boots get covered in young soil that is dark, fine and fluffy.

But as you can see, just 18 inches beneath that young soil layer is a solid foundation of stratified shale rock. It’s a stark and sudden shift that speaks to the true nature of the growing conditions in this block.

Here, the vine roots tend to grow laterally once they hit the hard rocky soil, seeking an easier way to acquire moisture. Consequently, the vines in this block have limited vigor and produce small, intensely flavored berries. In other words, the soil sets the tone for the fruit—and ultimately the character of the resulting wine.

And when the soils are as diverse as they are at Margarita Vineyard, it gives us that many more ingredients to create wines with natural depth and complexity. 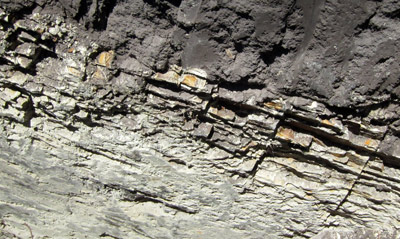