Our estate Margarita Vineyard resides in Paso Robles on California' Central Coast. Paso Robles was recently named "Wine Region of The Year" by Wine Enthusiast for excellence in quality, innovation and excitement.

Margarita Vineyard stands alone and apart as the southernmost vineyard in the Paso Robles region. That demarcation was officially recognized in late 2014 with the creation of the Santa Margarita Ranch American Viticultural Area (AVA), a new sub-appellation of the Paso Robles AVA.

Margarita Vineyard now enjoys the rare distinction of being the only vineyard located within its own namesake AVA—a testament to the vineyard’s unique growing conditions.

The Santa Margarita Ranch AVA is situated along the foot of the coastal Santa Lucia Mountain Range, roughly 25 miles southeast of the city of Paso Robles and just 14 miles from the Pacific Ocean to the west.

Attributes of the Santa Margarita Ranch AVA include one of the coolest, longest growing seasons in the Paso Robles region; a rare diversity of soil types originating from the tectonic uplift that created the surrounding Santa Lucia mountain peaks; and an abundance of rainfall, totaling 29 inches per year on average.

The singular attributes of the Santa Margarita Ranch AVA naturally translate into distinctive qualities that distinguish the wines from our estate Margarita Vineyard. The persistent marine influence, combined with unusually cold spring temperatures, creates a late, long growing season that allows the fruit to develop a signature combination of fully developed flavors and fine structure. The soil diversity allows for nuanced varietal expressions, enabling us to build natural complexity into our wines. 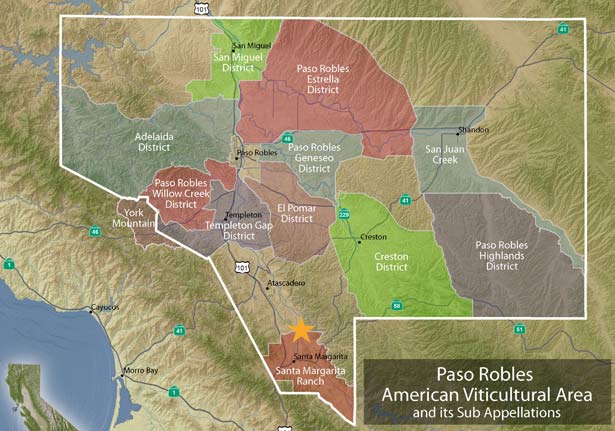