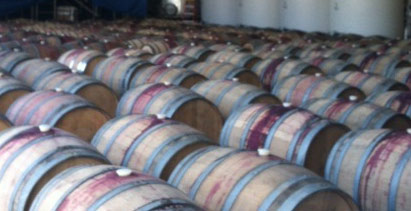 Would you like to try a barrel sample of our 2011 Syrah? How about 177 barrel samples? It’s hard work, but someone has to do it…

Indeed, the painstaking approach of our winemaking team was never more evident than when they recently deconstructed our 2011 Syrah.

First, our Cellar Master Octavio and his crew removed all 177 of our Syrah barrels from the barrel stacks, two at a time on racks that were gently forklifted to the ground. Then, Winemaker Mike Sinor and Assistant Winemaker Stewart Cameron tasted every single barrel to assess the quality of each. Because they were spitting, they were still standing!

Two goals were achieved. First, Mike and Stewart determined which barrels will be targeted for our 2011 Renegade blend. Based on what he tasted, Mike reported that “the 2011 Renegade is going to rock.”

Along the way, Mike and Stewart also resolved to create our first-ever Syrah for our White Label reserve tier, which will be made from the best four barrels, and representing just 2.25 percent of our Syrah from the 2011 vintage. That wine should rock, too.

Stay tuned—first for the 2011 Renegade by summer, and then the 2011 Syrah White Label after that.