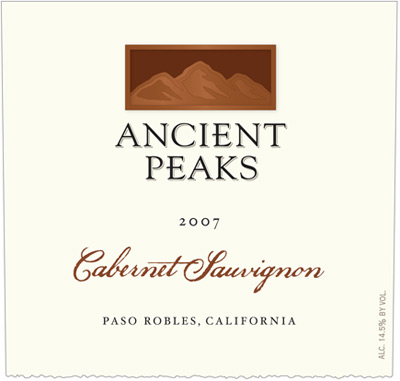 Time flies when you are having fun, which is why it seemed almost surprising when we were able to stage a recent 10-year vertical tasting of Ancient Peaks Cabernet Sauvignon.

Indeed, while it seems like just yesterday that we launched our winery, our first Cabernet Sauvignon dates back to the 2005 vintage, and this was the first time we have lined this many up in a row to compare and contrast. And although we are naturally biased, we have to say that we were pleased with the results.

“I was pretty impressed with how they were showing overall,” says Winemaker Stewart Cameron. “The 2007 was a standout for me, as was the 2010.”

Stewart noted that our Cabernet Sauvignons tend to gain finesse after several years. “As nice as they are in their youth, they really do improve with some years on them. You might not be inclined to think of an $18 Cabernet as ageworthy, but I would say that ours is one of the exceptions.”

Vintage variation was evident in the wines from year to year, with cooler and warmer vintages showing different attributes. Nevertheless, Stewart said that there is a common thread throughout, owing to the strong sense of place exerted by our estate Margarita Vineyard.

“Putting it into words is difficult, but there is definitely a thread,” he says. “There’s a certain element of structure and elegance that is rooted Margarita Vineyard’s distinct growing conditions—the cooler climate and diverse soils. That’s what makes these Cabernets show so well as the age. Without that inherent structure, they would not age nearly as well.”

Another fun thing to note during the vertical was the evolution of our Ancient Peaks wine label, from the original 2005 vintage label through the latest one adopted last year. You could say that the original labels didn’t age as well as the wines, but we are confident that the new one will stand the test of time!