Barreling Down at AP 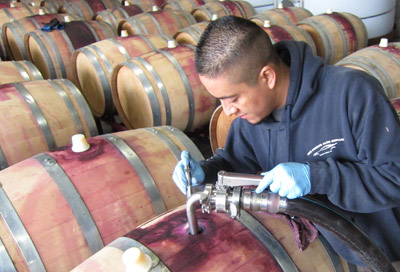 One of the more iconic annual moments in the winery cellar is the “barreling down” of new wine to begin the aging process.

Today, our team is barreling down Cabernet Sauvignon from Block 50 at our estate Margarita Vineyard, which is one of the last 2013 vintage lots to make the transition from tank to barrel.

The cellar is surprisingly quiet as the wine is barreled down. The Cabernet Sauvignon is being racked (transferred) from a larger tank about 100 yards away from the awaiting barrels. It is flowing through the hoses via gravity, so there are no pumps making noise. As the wine flows into the barrel through a long racking wand, it makes a splashing sound at first, and then goes silent as the level rises.

Gravity racking is preferable because it’s very gentle on the wine. Also, if there are any hiccups, you can just shut the valve on the racking valve without having to make an uphill 100-yard dash to turn off a pump!

The splashing and aeration of the wine as it fills the barrel is also beneficial. After fermentation, the wine has been resting in the tank with very little air exposure. Barreling down allows any suspended CO2 in the wine to blow off (if CO2 remains suspended in the wine, it will taste spritzy). This controlled air exposure also gives the wine a moment room to breathe and develop, setting the tone for the maturation period.

You have to be alert when barreling down. Right now, our cellar master Octavio is operating two racking wands. He starts one barrel, and then about halfway through he starts another. It takes three minutes for a 60-gallon barrel to fill up. So once the barrel is nearly full, Octavio has less than 90 seconds to gently top it off (see below photo), secure the bung and move the wand to begin filling the next barrel before rushing over to the other barrel that is rapidly filling.

Any hitch in the rhythm can result in what is known around the winery as a “volcano”—red wine erupting from an overflowing barrel. It doesn’t happen often, but it does happen. Rumor has it that Winemaker Stewart Cameron recently had a nice sweater ruined by a volcano!

So there you have it—a look at the quiet yet momentous occasion of barreling down at Ancient Peaks Winery. 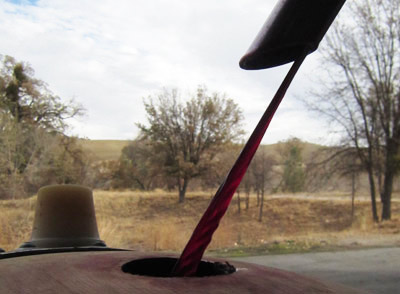