How to (Safely) Uncork a Wax-Sealed Wine 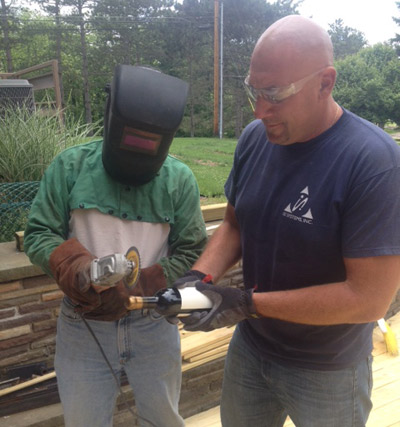 “I tried a sawzall then a cutting torch and now blasting caps!”

So wrote wine club member William Wallace the other day, explaining how he was struggling with opening a bottle of our wine. We hope he was exaggerating (and that the above photo he sent was mere theater!), but his note nonetheless inspired us to write the following public service announcement about how to safely open a wax-sealed bottle.

Let’s start at the beginning…When we bottled our limited-edition 2011 Syrah “Jackpot,” we went the extra mile to seal it with wax instead of the traditional foil. We felt it was an exceptional wine, so we wanted to give it a special look.

The unintended consequence is that William and possibly other club members have found the wax seal confounding when it comes time to uncork the wine. The seal feels firm to the touch, and indeed may look like it’s begging to be sawed or chipped off.

However, rule number one around any winery is “don’t hurt yourself.” That rule also applies to opening wine. If you ever find yourself reaching for a serrated kitchen knife, crowbar or other alternative instrument (or explosive), then stop immediately. It’s just not worth it—even if it is our epic 2011 Syrah “Jackpot” that you’re trying to liberate.

So just how do you crack the wax seal? The ancient principle of Occam’s Razor essentially says that the simplest option is usually the right one, and so it is that the best way to uncork a wax-sealed wine is to use what you always use: a corkscrew.

This simple method should work like a charm on our 2011 Syrah “Jackpot” and other wax-sealed wines.

However, there are instances when wineries use an overly hard wax to seal their wines, which can make the corkscrew method extra challenging if not impossible. In which case, we recommend that you contact William. We hear he has a cutting torch.