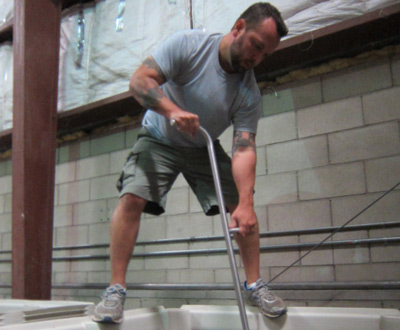 We are excited to introduce Chris Thompson as our East Coast Sales Specialist starting in 2014.

In this newly created position, Chris will be charged with taking our East Coast distribution to the next level while growing the visibility of the Ancient Peaks brand. Chris actually joined us earlier this fall as a harvest intern to learn winemaking from the ground up (as pictured above). Prior to that, he served as a wine consultant for The Country Vintner in North Carolina, one of the nation’s premier fine wine distributors. His experience in wine sales and distribution spans more than eight years.

We caught up with Chris to get his take on how he got here, and where he’s going with Ancient Peaks:

Why were you drawn to Ancient Peaks in the first place, to the point of coming out west to work the crush?

Two things really stood out. First, the ownership families…There are such great people involved here in the ownership and management of this winery, and they’re very hands-on. That was a big influencing factor. Also, Margarita Vineyard and Santa Margarita Ranch…This is such a  unique place, with its own climate, and it’s very different from any other part of Paso. Not only do you have the vineyard, you have the history and the cattle, and now the zipline tours. There’s so much diversity here and so many things going on. It seemed like a great company to work for, and a good place to gain winemaking experience.

What was your favorite part of working in the winery?

It’s hard to say. There really wasn’t one task that stood out overall. I just enjoyed learning the various aspects of winemaking and the physical labor of it all—and having that instant gratification of helping make something with tangible results. All that hard work makes a beer taste even better at the end of the day, too.

What’s your vision for Ancient Peaks on the East Coast?

I want to establish Ancient Peaks as a household name. The first step is to get wine directors, managers and buyers excited about Ancient Peaks, so that they turn their customers onto our wines. That’s the way to start building a market presence. In time, however, I want Ancient Peaks to become a brand that people recognize and depend on and ask for by name. That’s something you already see here on the Central Coast with Ancient Peaks, and I want to make it happen on the East Coast as well.

I also want to educate people about Santa Margarita Ranch, which is set to become a sub-AVA of Paso Robles. A lot of people don’t know about the unique pockets and microclimates that make up Paso. They may have heard about the Westside or Templeton Gap, but there are a lot of other spots like El Pomar and Santa Margarita that aren’t as well known yet. Being the only grower in Santa Margarita sets us apart, and I want to get the word out about that.