It Starts with Pruning 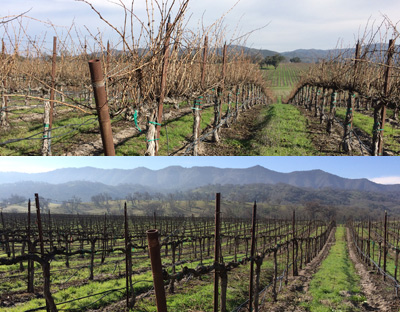 The vines at our estate Margarita Vineyard are now getting their annual haircut in preparation for the growing season ahead, as shown in the above photos taken this week.

Winter pruning is not only a fundamental act of vineyard cultivation--it can also have a significant impact on the quality of the vintage to come. In the words of Director of Winemaking Mike Sinor, "Pruning is something that is critical to making the wine taste great. Winemaking isn't something that just happens at the winery, but something that happens all year long, starting in the vineyard."

For this reason, we are vigilant when it comes to pruning, to ensure that the vine grows in a balanced manner through the growing season, and to keep yields in check for the development of rich, concentrated fruit.

After harvest and when the winter season sets in, we are left with a skeletal vine with bare branches, called canes (see top photo). When we prune these canes, we leave just two buds per spur (the little knobs on the cordons, or arms, of the vine). These buds will later push new canes, and these canes will bring forth the new fruit of the growing season ahead. By limiting the amount of buds, we control the eventual grape yield.

But it's not just a matter of flying through the vineyard and cutting the canes according to the two-bud rule. In fact, pruning is an art, whereby the vineyard team must also choose where to make the best cut and which buds to leave. From a quality standpoint, the ideal vine will have clusters and canes that are evenly spaced, with enough room for air to flow through the canes, and diffuse sunlight to filter through.

And that's exactly what Vineyard Manager Jaime Muniz and his crew are aiming for right now with their pruning activities, so that we can get the most out of our upcoming 2016 vintage wines.