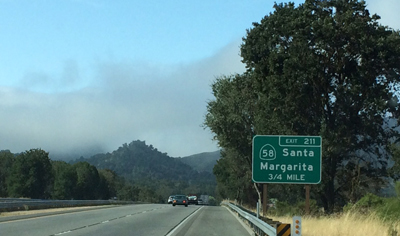 They say that a picture is worth a thousand words, and here is a perfect example—a photo taken the other day of coastal fog clutching the peaks of the Santa Lucia mountains in Santa Margarita on an otherwise sunny morning above the Cuesta Grade.

We often talk about the climate of our estate Margarita Vineyard here, because we are on the dividing line between the warmer inland environs to the north and the cooler coastal region south of the grade.

As such, our climate is a bit of a hybrid that is vividly captured in this photo—a borderland of sun and fog, situated in the mountains but only 14 miles from the beach.

Of course, this can’t help but have a significant impact on our fruit and ultimately the character of our wines.

Indeed, this consistent cooling effect creates a long growing season with later harvest dates. We are still able to fully ripen signature Paso Robles varieties such as Zinfandel, Cabernet and Merlot, but in a manner that maintains a signature structure and balance that are rooted in the climate. You can taste it, and sometimes you can even see it on a September morning like the one pictured here.