While the vines are bare and the autumn grape harvest is still eight months  away, we are already taking action in the vineyard to maximize the caliber of the fruit to come—starting with pruning.

As our Director of Winemaking Mike Sinor says, “The 2014 vintage starts right now with pruning season. The wines of 2014 are already being shaped by things we are doing in the vineyard—long before the grapes have even started growing.”

Our estate Margarita Vineyard is planted to a VSP (for vertical shoot position) trellis system. With this system, the main part of the vine is shaped like a “T,” with the vine branches trained upward with catchwires. The vines in a VSP system consist of four key parts: the trunk, the arms (called cordons), the spurs (the large knobs on the cordons) and the canes (the branches).

We prune for quality over quantity, so we select one cane per spur and cut it back so that just two buds remain. The buds will open up during “bud break” in early spring. From the buds grow new canes and, ultimately, the grape clusters.

Pruning sets the stage for the upcoming growing season. With pruning, you directly control your grape yields, which in turn impacts fruit balance and intensity. Pruning decisions also affect the amount of sunlight and airflow that will penetrate the fruiting zone of the vine. Diffused sunlight aids with grape ripening, while healthy airflow keeps mildew in check.

Smart pruning requires training and commitment. The vineyard crew must move quickly, making split-second decisions on where to best make their cuts.

“When deciding where to cut, you have to think of where you want the clusters to sit on the vine,” says Vineyard Manager Jaime Muniz. “You want to separate the clusters as much as you can to get that airflow and sunlight, and to deliver the best quality to the winery.”

And so begins the vintage to come... 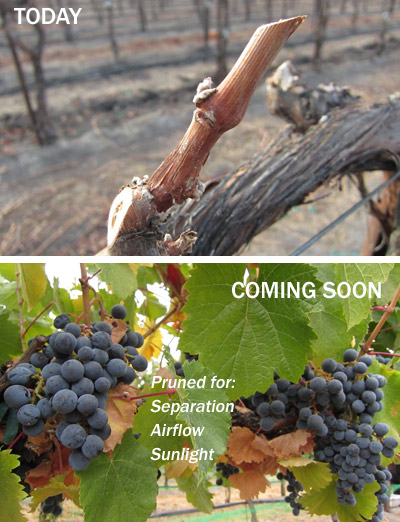