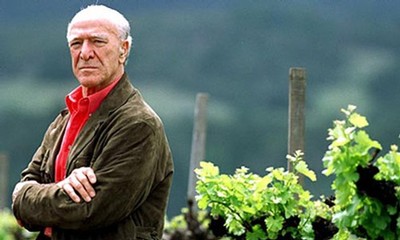 One little-known fact about our estate Margarita Vineyard is that was planted by the Robert Mondavi family, who are rightfully considered California wine royalty.

Robert Mondavi (pictured above) was a visionary who recognized Napa Valley’s potential early on, and he and his family brought a similar vision to Santa Margarita Ranch many years later.

The story begins in 1999, when, after extensive site research, the Mondavis leased a section of the ranch to plant what would become known as Margarita Vineyard (originally called Cuesta Ridge Vineyard). This was virgin territory for viticulture—other than the mission grapes planted here by the padres in the late 1700s—and there were no neighboring vineyards. But the Mondavis saw something special here, and they went all in. In fact, they actually tried to acquire the ranch outright, but settled for a lease.

At the time, some viewed the ranch as an impractical place to grow the types of grape varieties for which the Paso Robles region is known, including Cabernet Sauvignon and Zinfandel. The ranch occupies one of Paso Robles’ coolest growing environments, and it can be difficult to ripen these varietals in cooler years. But the Mondavis knew that with attentive viticulture, the ranch’s late, long growing season would translate to rich flavors with uncommon structure and balance. They also saw the diverse soils and contoured land, and knew that these things would translate to complexity in the field.

The Mondavis also blazed a sustainability trail here on the ranch. At the time, one observer said the Mondavi’s progressive practices put Margarita Vineyard “at the vanguard of sustainable agriculture in the region if not the state.”

By 2005, however, the Robert Mondavi company was under new ownership, which didn’t fully understand what the Mondavis had seen in this land.  As the owners of the ranch, were able to buy back the original lease and take full control of the vineyard. Ironically (and fatefully!), the potential of Margarita Vineyard was just beginning to be realized, and it inspired us to start making estate-grown wine under the Ancient Peaks label beginning in 2005.

We are fortunate to be the inheritors of the Mondavi family’s vision, which can today be tasted in the wines of Ancient Peaks, and which is reflected in our continued commitment to sustainable winegrowing.