When All-New Oak Is Just Right

We present our Oyster Ridge red blend as the crowning achievement of each vintage. While the blend varies from year to year, it is based upon Cabernet Sauvignon, which typically ranges from 55 to 70 percent of the total blend.

And when we tell people that all of Oyster Ridge’s Cabernet Sauvignon is aged in 100-percent new French oak barrels (including those by Taransaud, pictured here), it often elicits the question: doesn’t that “over oak” the wine? In fact, it doesn’t…

Stewart explains that there are a dozen different identifiable flavor and aroma compounds that come from oak. Because the chosen barrels are “tightly grained,” they allow for a slow release of these compounds over an extended period of time—ideal for a wine like Oyster Ridge, which is aged for a full two years prior to bottling.

“The tighter grain of the Taransaud barrels is respectful of the fruit and character of the wine,” Stewart says. “So we get the complexity benefits of new oak without the oak influence getting too aggressive or out of balance.”

Fruit quality is the other factor. The Oyster Ridge blend is assembled around the finest Cabernet Sauvignon blocks at our estate Margarita Vineyard. The fruit from these blocks exhibits exceptional depth and structure, allowing it to gracefully handle the new oak.

“Someone once said that there’s no such thing as an over-oaked wine—just an ‘under-vineyard’ wine,” Stewart says. “That may be an exaggeration, but there’s a grain of truth to it, too.”

Wine from The Ground Up

In the brief new video above, we offer a glimpse of our hands-on vineyard tours that conclude with a wine tasting and food pairing at our private tasting annex.

This isn't just another vineyard tour, but rather an immersive experience that you won't forget.

We personally guide you out to our estate Margarita Vineyard for an up-close look at growing wine from ground to glass on the historic Santa Margarita Ranch.

Along the way, you learn about our sustainable practices, remarkable climate, uniquely diverse soils and other viticultural insights that will enhance your wine appreciation. 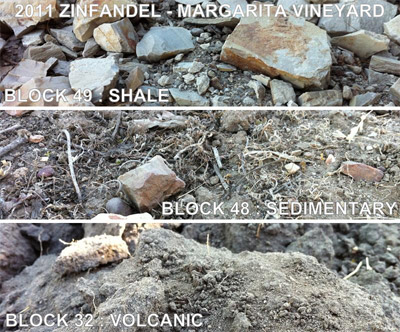 We recently staged a tasting of barrel samples from our various Zinfandel blocks, and our guests were astonished at the profound differences in aroma and flavor—even though all of these Zinfandel lots came from the same vineyard, and several were of the same clonal selection.

Of course, these differences are also shaped by the weather exposure of a particular block and other factors. But there is no doubt that the rare diversity of soils at Margarita Vineyard enhances the distinctions between our Zinfandel components.

So what does this mean to the wine? It essentially gives Winemaker Mike Sinor and Assistant Winemaker Stewart Cameron more colors to paint with, allowing them to naturally build nuance, depth and complexity into a single estate grown Zinfandel.

We are confident that you will taste these qualities in our 2011 Zinfandel, which is now available in our tasting room.

It's flowering time at our estate Margarita Vineyard, whereby the baby clusters self-pollinate to set the crop for the upcoming vintage.

As our Assistant Winemaker Stewart Cameron explains in this video, the flowering process begins when the cap over the petals is shed, liberating the pollen and allowing for crop set.

This is the beginning of the fruit's life cycle, which will continue from now through the 2013 harvest. Stay tuned!