We are excited to share that we have promoted Stewart Cameron from assistant winemaker to the position of winemaker. Mike Sinor will remain our director of winemaking.

It seems like just yesterday we were launching our winery, with Stewart as part of our cellar crew. That was in 2006…Now, here we are seven years later, and we are proud to have him as our winemaker.

“Stewart has been an instrumental part of our winemaking team since day one,” Mike says. “He has a great feel for the style and vision of Ancient Peaks wines, and the time has come to recognize his talents and responsibilities with the title of winemaker.”

Stewart will continue to oversee the daily winery operations and remain involved in all facets of winemaking in tandem with Mike.

“Stewart has a knack for making wines that really capture Margarita Vineyard’s sense of place,” says co-owner Doug Filipponi. “He has helped our wines earn widespread industry praise, and we are excited to have him as our winemaker.”

Over the past year, Stewart has traveled to France and Italy to broaden his winemaking inspirations, and has developed a particular affinity for the small-block winegrowing practices in the northern Rhône Valley and Barolo.

“They’re both relatively small regions, and they have a real fix on the nuance and complexity at the micro level of each little block, or even a few rows,” Stewart says. “It doesn’t always translate out here, but we try to do our own version of it, micromanaging specific spots—such as the top of Block 7 or the hillside on Block 49 at Margarita Vineyard—to get the most out of our White Label reserve wines.”

He adds, “It’s a great honor and privilege for me to work here with such a wonderful vineyard and group of people. I will continue in the effort to bring joy and blessings through our wines here at Ancient Peaks.”

The Skinny on AP Sauvignon Blanc

In the winemaking notes for our new release 2012 Sauvignon Blanc, you will find this little tidbit: “Ten percent of the wine underwent 24-hour skin contact prior to pressing and fermentation, further adding an exotic touch to the wine.”

This is just one of many examples of how our winemaking team employs judicious experiments and extremes for the betterment of our wines.

In traditional winemaking, white wines are made by immediately pressing the juice off of the skins prior to fermentation. But in this case, Winemaker Mike Sinor and Assistant Winemaker Stewart Cameron took a walk on the wild side and let a small portion of the juice soak on the skins for a full day.

Taken on its own, this is somewhat of an extreme measure. When you allow that kind of skin contact, you get Sauvignon Blanc wine with intensified varietal attributes.

“You get much more of that herbal character that’s inherent to Sauvignon Blanc,” Stewart says.

Therefore, if we handled all of our Sauvignon Blanc lots in this manner, we would end up with a wine that most folks would consider too edgy and atypical.

Yet by thinking outside the box and going the extra mile with select skin contact, Mike and Stewart developed a crucial 10-percent component that elevates the final blend.

“It helps us produce a more interesting an intriguing wine,” Stewart says. “We’re just intensifying the natural qualities of the grape to accent and enhance our Sauvignon Blanc blend. Little things like this can go a long way toward making a more complete wine.”

The 2011 vintage marks the third release of our Renegade red blend, and once again it offers an unconventional union of Syrah, Malbec and Petit Verdot.

“With the Renegade, we set out showcase the Syrah from our estate Margarita Vineyard, but to do it with some added backbone,” says Winemaker Mike Sinor. “You still get the yumminess of the Syrah, but there’s this complexity and structure that takes it to another level.”

In just two years, the Renegade has emerged as one of our most acclaimed wines, and we believe that the 2011 vintage may be the finest yet. This wine is now available at our tasting room, and will start hitting the retail market at the end of this month.

In the accompanying video, Mike elaborates on the vision behind the 2011 Renegade. 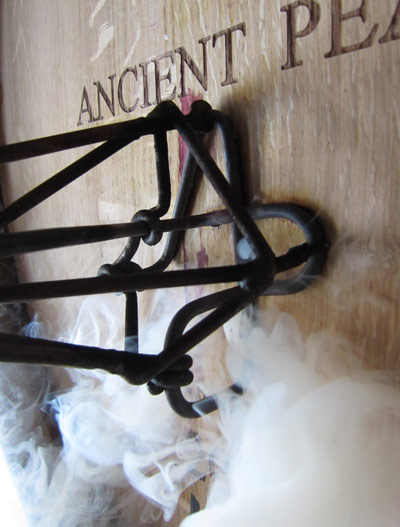 Our estate Margarita Vineyard resides on the historic Santa Margarita Ranch, so we are no strangers to branding…and we’re not talking about the marketing sense of the word!

It should come as no surprise, then, that we like to hot-brand our barrels with a signature “AP” brand mark.

The accompanying pictorial shows how we do it. Once the electric hot brand is applied with a steady hand, it only takes a few seconds for it to make its permanent mark.

We think that it adds a distinctive touch to our winery, one that ties directly into our ranch heritage. 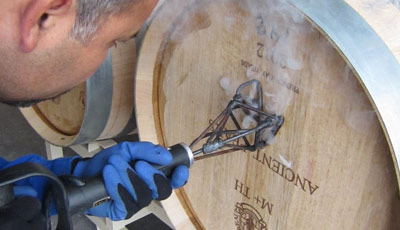 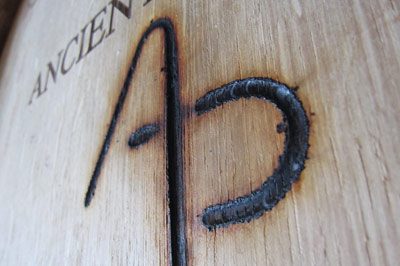 Duke the beagle is the boss of Assistant Winemaker Stewart Cameron, and the official winery dog of Ancient Peaks.

Today, we present "A Day in The Life of Duke" to show off his many talents, including vineyard management, staff training, winemaking and hospitality.

We salute Duke and all of the hard-working winery dogs out there!