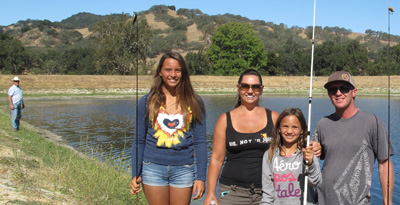 We like to say that our wine club members are part of our family, which may explain why you never know what we will spring on them…

Our latest out-of-the-box wine club adventure was “Gone Fishing” with winery co-proprietor Karl Wittstrom, who invited wine club members out for a morning of fishing  along the 13-acre reservoir at our estate Margarita Vineyard . Along the way, Karl (the photobomber above in white, behind guests the Mylan family) instructed the group on how to catch and release the reservoir’s largemouth bass.

A total of 18 club members came out, and all of them caught fish. Club member Ron George, pictured below, kindly called it “heaven on earth.” Another member, Gary Smuts, said that they had a “fintastic” time.

The fun didn’t end there. “We had snacks and water on-site, but once the club members had their fill of fish they headed back to the tasting room to quench their thirst in the tasting room,” says Erin du Fresne, our wine club manager. “What better way to spend a Sunday on the Central Coast?”

If you’re a club member, stay tuned for our next adventure. If you’re not a member yet, click here to check out the many benefits that await (including the occasional fishing expedition). 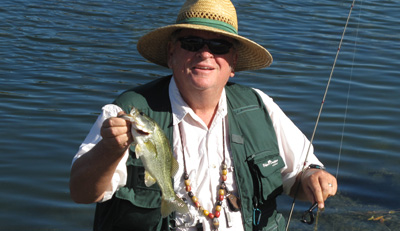 We are inching ever closer to the 2014 harvest, but the hard work has already begun in the vineyard.

One of our pre-harvest activities is green harvesting, a.k.a. “crop dropping”—the act of removing imperfect grape clusters from our red variety vineyard blocks.

Our crew travels down the vine rows, looking for grape clusters that are lagging in the ripening process—specifically  those that are still more than 50 percent green after veraison is well underway (click here for more on veraison). These clusters are unceremoniously cut from the vine and left to compost back into the vineyard.

Of course, it would be easier to not invest the time and money into green harvesting, and to leave more crop in order to maximize production—but when quality is the name of the game, you go the extra mile.

In the following video, you can see crop dropping in action, courtesy of a team training session with our tasting room staff.

Last week, we wrote about the good tidings of our 2012 Merlot, which is our finest vintage to date.

We've been bullish on Merlot since day one, even when the varietal was in the proverbial doghouse after its Sideways-inspired backlash.

Well, as Director of Winemaking Mike Sinor confirms in the following video, Merlot is back, baby! 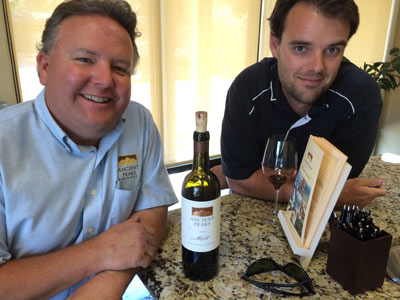 We are happy to help drive the last nail in the coffin of the “Merlot is dead” movement.

Merlot is far from dead—in fact our new release 2012 vintage is kicking butt, having already earned a gold medal for “Best of Merlot” at the Central Coast Wine Competition and a gold medal with 90 points at the San Francisco International Wine Competition (pictured above are Director of Winemaking Mike Sinor and Winemaker Stewart Cameron with the fruits of their labor).

Merlot’s low point started in 2004 with the hit movie Sideways, in which the lead character Miles staged a hilarious rant against the noble grape. This pop culture moment—combined with some admittedly uninspired Merlots flooding the marketplace at the time—sent Merlot into a tailspin of public perception.

Suddenly, Merlot was on the outs. It was un-hip. It didn’t disappear, but it had its tail between its legs for years thereafter.

But here at Ancient Peaks, we weren’t going to let a fictional movie character tell us what to make. Back in 2005, we knew that our estate Margarita Vineyard—with its ancient sea bed soils and pronounced marine influence—could produce exceptional Merlot. So we’ve proudly waved the Merlot flag since day one.

Now we’re happy to release our finest Merlot to date, at a time when the anti-Merlot movement is happily losing steam.

The 2012 Merlot comes from three different blocks at Margarita Vineyard that exhibit a range of distinct qualities, bringing added natural complexity and dimension to the finished wine. The 2012 vintage presents ample aromas of blueberry and plum with hints of vanilla, tobacco and baking spice. The palate is round and velvety, offering flavors of cherry, blackberry and mocha. Notes of oak and cinnamon join plump tannins on a rich, juicy finish.

The bottom line is that the reports of Merlot’s demise were greatly exaggerated. Long live Merlot! 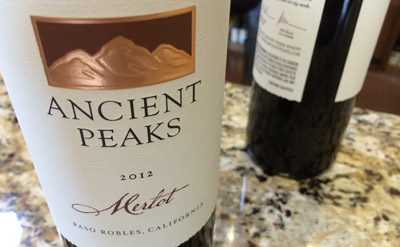