Aiming to "Over Deliver" 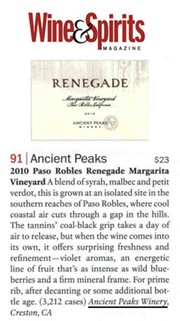 One of our mantras at Ancient Peaks is that we aim to “over deliver.”

This means that we always strive to provide value at any given price point, whether it be one of our $17 varietal reds or our $35 reserve White Label wines or our $50 Oyster Ridge cuvée. It’s part of our winery culture, and it has helped us earn a loyal following.

We have a few things working in our favor. For starters, we have an estate vineyard—Margarita Vineyard, the southernmost vineyard in the Paso Robles region—that delivers high-character fruit. Better yet, we only use a fraction of the fruit from this vineyard (the rest is sold to other wineries), allowing us to pick and choose blocks that fit our winemaking vision, and to farm them exactly how we want. On top of that, our Director of Winemaking Mike Sinor and Winemaker Stewart Cameron are really talented and in tune with the estate fruit.

This list was compiled from 12,500 wines tasted from around the world! So to place two wines on the list is quite gratifying, and it affirms that our pursuit of over-delivering is going well. 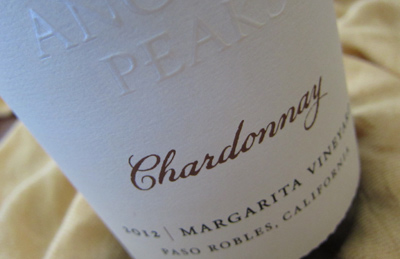 When painting with a broad brush, you could call Paso Robles a warm winegrowing region. And it's true that Burgundian varietals such as Chardonnay and Pinot Noir—which are known to excel in cool regions—aren’t typically associated with Paso Robles. Here, it’s Bordeaux and Rhône varietals that make the most noise.

But the broad brush often misses the nuances, and that's why we are confidently producing Chardonnay and Pinot Noir from our estate Margarita Vineyard in the Paso Robles AVA.

Margarita Vineyard is the southernmost vineyard in the region, with a pronounced marine influence. It's often cool and sometimes cold here during the growing season. That's our baseline.

From there, we've planted our Chardonnay and Pinot Noir in the vineyard's coolest spots. One such spot is at the mouth of Trout Creek, where marine air spills through a notch in the coastal mountains.

In these spots, the notion of growing a premium Paso Robles Pinot Noir or Chardonnay isn't wild and crazy. It's simply a logical fit for the growing conditions.

On that note, we are excited to release our 2012 Chardonnay from our White Label (reserve) series. We think that this wine shows just how good a Paso Robles Chardonnay can be. This follows our 2011 Pinot Noir, which was also varietally true and equally delicious. Right now, these wines are very limited in production (in the range of 100 to 150 cases), with our wine club members getting first dibs.

Our Chardonnay and Pinot Noir will never supplant our Bordeaux varietals in acreage or production. But we are excited about where these wines are headed. They speak not only to the diversity of our vineyard, but of the Paso Robles region as a whole.

When it comes to Paso Robles, you’ve probably heard about the eastside and the westside, but here at Ancient Peaks, we’re on the southside—and still in the thick of the 2013 harvest at our estate Margarita Vineyard. View and read our report below:


On the whole, we are just past the halfway mark in our picking. As of October 13, only about 20 percent of our Cabernet Sauvignon is in the house. About 60 percent of our Syrah has been picked, and all of our Merlot, Pinot Noir and Sauvignon Blanc fruit is off the vine. Zinfandel is mostly done. But we just began harvesting our Malbec, and haven’t even started on the Petit Verdot.

At this rate, we should be fully done with the grape harvest by the end of October or first week of November. This is rather typical—and even a bit early—for Margarita Vineyard, which is the southernmost vineyard in the Paso Robles AVA. It’s cooler here, and so the growing season is long.

Yields are a bit larger than normal, which is somewhat surprising in the wake of such a dry year. We’re not alone, as larger yields are one of the stories of the 2013 vintage in California.

The sailing has been smooth this harvest, especially compared to recent years. In 2008, we experienced eight inches of rain in one harvest day. In 2010, an unusually cool summer forced us to drop an inordinate amount of crop just to make sure we got things ripe. The 2011 growing season was fairly cool, too. Last year was nice, but a bit more erratic with regard to hot weather events.

But this year has been rock steady—warm but rarely hot, with consistent temperatures heading into fall, and just a few drops of rain one day in early October.

Even with the healthy yields, we’re getting a nice intensity of color and flavor out of the fruit. Yesterday morning, during our first Malbec pick, the picking bins were stained a dark purple—an unscientific yet clear indication of what we’re getting in terms of concentration. By mid morning, the air was still chilly and thick with fog, demonstrating why we still have a few weeks to go.

With later-ripening varietals like Cabernet Sauvignon, we sometimes find ourselves on what we call “the edge of ripeness”—that long wait for the grapes to fully mature. And we’re fine with that, because it’s a great way for the fruit to maintain its balance and varietal character.

This year, however, full maturity is coming more easily. We’re not looking over our shoulder at a coming storm or at our watches waiting for the fruit to get in gear. Mother Nature has smiled upon us, and it should result in a banner vintage.

The latest edition of Sunset’s Savor The Central Coast was a big success over the past weekend, and we were pleased to be right in the thick of it.

We kicked things off on a beautiful Friday morning by hosting one of Savor’s signature “Adventure Tours” at our estate Margarita Vineyard. The tour was titled “Winemaking on The Wild Side,” celebrating the unconventional blends for which Paso Robles is renowned.

Neil Roberts from Clavo, Christian Tietje of Cypher, Steve Lohr of J. Lohr and our own Mike Sinor, along with moderator and sommelier extraordinaire Christopher Sawyer and Sunset wine editor Sara Schneider, were on hand to help guests create their own daring blends from selected lots of Zinfandel, Syrah, Malbec, Petit Verdot and Cabernet Sauvignon. Each guest’s blend was then bottled, corked, wax dipped, and labeled on site. The festivities concluded with a vineyard lunch catered by The Range.

Then, throughout the weekend, our Santa Margarita Ranch headquarters played host to Savor’s Main Event, which included an extensive Marketplace featuring local food artisans, growers, wineries, craft breweries, celebrity chefs and more, as well as cooking demonstrations and wine seminars. As always, this event was a remarkable showcase for the distinctive farm-to-fork culture of San Luis Obispo County and the Central Coast.

It’s not too early to mark your calendar for next year’s Savor The Central Coast, and keep an eye out for announcements about next fall’s adventure tours—they often sell out fast! 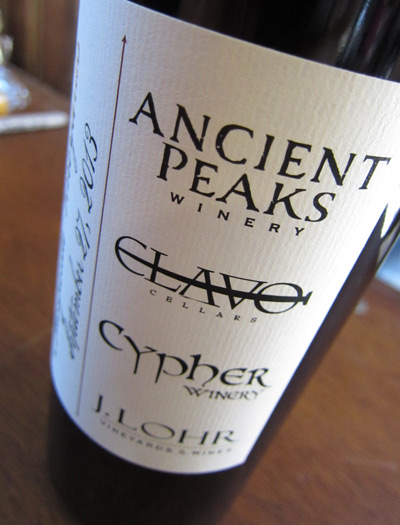