The next vintages are starting to roll into our tasting room and into the market, and the new year is near. So before 2016 arrives, we thought we would take a look back at some of our greatest hits from 2015:

“90 POINTS…Fleshy on the palate, with nicely focused blackberry, mulberry and plum flavors.”

“94 POINTS...Named to YEAR'S BEST U.S CABERNET'S & BLENDS LIST...It’s a wine that channels Paso’s abundant sunlight toward precision and purity rather than richness and concentration…Its bright, compact structure is poised to gain complexity with another eight to ten years in the bottle." 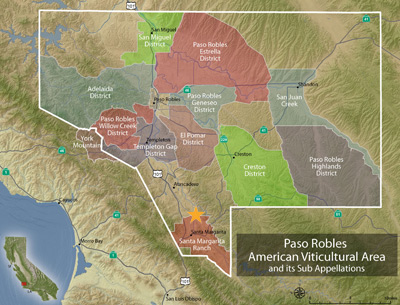 You will sometimes hear us throwing around the term “AVA,” particularly now that our estate Margarita Vineyard is part of the new Santa Margarita Ranch AVA.

So what is an AVA? It’s shorthand for “American Viticultural Area,” which is a term for a federally recognized and defined winegrowing area.

By default, an AVA can be mere political boundary such as “California” or “San Luis Obispo County.” But it is more frequently meant to describe a specific geographical area unified by climate, soil and other geographic factors that consistently influence the characteristics of wines grown in that area.

Let’s use the Paso Robles region as an example…

The Paso Robles AVA was established in 1983 to recognize the common characteristics of wines from this region.

Over the ensuing 30 years, the Paso Robles wine industry flourished, and in time certain areas within the Paso Robles AVA began to exhibit their own unique characteristics—much in the way that “Oakville” and “Stag’s Leap District” have become recognized pockets within the Napa Valley AVA.

So the next step was to establish “sub-AVAs” of Paso Robles, to further drill down into the diversity of our region. This was not some whimsical exercise—it was a very involved process born of demonstrable distinctions that were officially recognized by the federal government.

So now you know the story of why our wines going forward will include references to both “Paso Robles” and “Santa Margarita Ranch” on the label, to celebrate our unique sense of place.